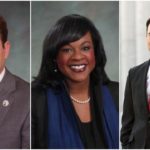 As the public struggles to keep up with constant developments around COVID-19, many Colorado lawmakers are doing what they can — albeit virtually — to provide accurate information and combat circulating rumors while maintaining social distancing guidelines.

Together, they fielded questions from the community throughout the hour-long meeting, which drew in more than 1,500 people.

Callers’ worries around the coronavirus were extensive, ranging from the dangers of scamming and the shortage of available protective masks to the availability of unemployment insurance and how hospitals are bracing for a surge in patients.

Herod early in the call highlighted the newly passed federal CARES Act, which was passed on Friday and grants roughly $2.2 trillion to address the economic impact of the coronavirus. In addition to dispersing cash payments to nearly all U.S. taxpayers, the relief package also allocates $2.2 billion for Colorado’s coronavirus relief fund, Herod said, as well as directs several millions in grant funds to support Coloradans experiencing homelessness.

The first question came from a caller named Tanya, who said she’s been seeing a deluge of social media posts about people being scammed after seeking coronavirus-related assistance. She asked Weiser if there was a way for people to report scams.

“This is literally our top priority right now,” Weiser said. “It’s heartbreaking, and it’s predictable, when we see crises like we’re going through right now. People are afraid and, unfortunately, scammers try to take advantage of and prey on this fear.”

Weiser said his office is seeing “a range of scams,” including claims of COVID-19 cures and vaccines, as well as online testing capabilities.

He also said that his office has started to see swindles around the new federal checks that will be coming people’s way soon.

The best way to report the scams, which Weiser is urging the public to do, is online at stopfraudcolorado.gov, he said.

Another caller, Matt, wondered “how bad this is going to get for our hospitals and health care systems, specifically in Denver.” He also asked what the timeline will be until things “get back to normal.”

Ott said new data would be available early this week that will provide a “better picture” of how this virus will play out in the state. However, as of now, he said, “Our modeling doesn’t yet show the curve flattening in Denver.”

It could take until late May or early June for the curve to flatten, he said, although it could also flatten as soon as late April.

When asked how the state would ensure there are enough health masks in Colorado, Garnett said that he recently worked with the Denver Broncos and House Minority Leader Patrick Neville of Castle Rock to organize a personal protective equipment drive, which he called “incredibly successful.”

He also said that the state received a shipment from the national stockpile last week, but that it wasn’t enough.

“One of the things that was really good was the federal government just (on Saturday) approved Governor Polis’ request to declare a major disaster for the state of Colorado,” Garnett said. “This will actually open up lines of additional assistance from (the Federal Emergency Management Agency) and from the federal disaster. So, I’m hopeful through that declaration that we will get additional shipments from the national stockpile.”

Another caller, a freelance musician named Rodney, inquired about the possibility of obtaining unemployment insurance.

“The federal program is going to provide for those who, like you and many other musicians, independent contractors and others, are not typically covered by more standard unemployment insurance,” Teegarden said. “This is already settled in terms of the procedures with regard to this new program.”

However, he said, “We’re asking people to give us a couple of days before they go online to file.”

The state is working with the federal government on what the precise procedures are for getting those benefits transferred, he said.

“The key is to not have people apply for this before the federal benefits are available online, so you don’t unnecessarily get rejected through the standard unemployment insurance program,” he said.

More information on unemployment assistance can be found at coloradoUI.gov. The website will be updated when the state is ready to accept claims.

“It’s our plan to have additional information up on our unemployment insurance website by early this week,” Teegarden said, “certainly before Wednesday.”

Another Coloradan, named Evelyn, said she had heard “through the grapevine” that some Denver hospitals may have to turn people away who are over the age of 60 and asked how valid this information was.

“There are no plans at Denver Health to turn away anyone, regardless of age,” Burman said, “and I don’t know of anything from any other hospital in Denver that would suggest that either.”

What is happening, he said, are discussions about if resources become very stretched, as they are in some parts of New York City right now.

“There may be distinctions that need to be made about the use of ventilators, for example, and age and degree of chronic illness may come up in dire situations in which the health care system is overwhelmed.

“We certainly hope to not have that occur in Denver, and a lot of work is happening to try to prepare so that we don’t end up in any situation like that,” he said.

One example Burman gave is that Denver Health is more than doubling its intensive care unit beds over the next two weeks to be able to handle that rush and is also requesting assistance to get additional equipment, including ventilators.

Another caller, Chris, asked when schools would reconvene again and what the plans are with the metro area’s school districts.

“I’m hearing speculation that there’s probably a good chance that there won’t be in-person teaching again for this school year,” said Garnett, but added that those decisions have not yet been made.

“I think the other thing the school districts are all watching very closely is what the economic downturn is going to mean to the state budget and how that’s going to impact the School Finance Act, which is the school finance formula where we distribute state funds to the 178 school districts,” he said. “I think the districts are very concerned about the impact on school funding.”

As the call came to an end, Herod offered some closing remarks, leaving community members on a positive note.

“I’m so encouraged by everyone who is really reaching out to help their neighbors and their communities and their friends and even new people that they don’t even know,” she said. “The number of folks who are going to pick up groceries, who are dropping toilet paper off at people’s houses — all of the things that folks are doing is just really helping … Thank you for that. It just makes me so proud to be a Coloradan and so proud to represent Denver.”